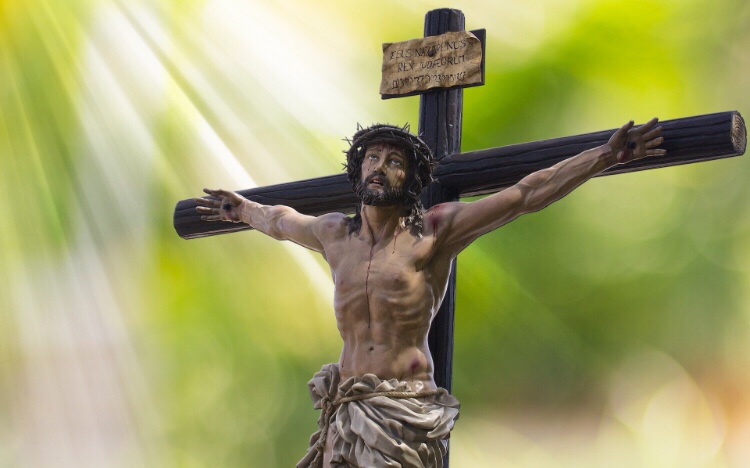 Easter is approaching and I’m more burdened this year than ever for friends and family who haven’t accepted Jesus Christ as their Lord and Savior. Maybe it’s because I believe our time is short before His return. It’s also that I see our culture and country falling away from God or picking and choosing what they want to believe about Him. He’s not an a la carte God.

He is holy, perfect and righteous. He is full of love, mercy, grace and forgiveness. He is a Healer, a Provider, a Helper, a Protector, a Defender, a Creator, a Redeemer, and so much more. But He’s not what you want Him to be to suit your selfish needs.

If God can mean one thing to you, something different for me and yet another thing for every other person in the world, what kind of God is He? He’s no god at all. You’re choosing to be your own god created in your own image.

But I get it. People don’t want to accept God for who He is and what He says. Jesus said He is the way, the truth and the life and that no one gets to the Father except through Him. It’s hard for people to accept this because it seems narrow and exclusive. God doesn’t want to exclude anyone. His love and salvation includes everyone who repents and accepts Jesus as their Savior. Jesus also said that God sent Him into the world so that people wouldn’t perish, but would have eternal life if they believed in Him.

But Jesus is the key to the gates of Heaven. The only key. He has to be. Why would God allow His Son to suffer the way He did if there was another way to redeem and save us? Why would Jesus be willing to go through such agony for you and me if there was another way, another person who had another key? Jesus wanted there to be an alternative. As He sweat drops of blood in the Garden of Gethsemane, Jesus asked God the Father for another way. Jesus agonized over what He had to suffer to save us from Hell. If there had been another way, don’t you think Jesus would’ve said, “Hey, Dad, let’s let them choose options B or C, ok?” But ultimately, He knew there was no other way. He’d already told everyone that and He’s still telling us today.

God doesn’t choose to condemn anyone to Hell. Hell wasn’t made for us. But we choose it for ourselves when we reject His Son.

Yes, the road to Heaven is narrow and the road to Hell is wide, Jesus said. And He goes on to say that some people will claim to be Christians, but He will call them works of iniquity and tell them to depart from Him because He never knew them.

These are Jesus’ words. Not mine. Before you dismiss them, you should at least do your own research. Open the Bible with an open mind and read it. Study the claims of Jesus. See how they stand up against history, archeology and science. See how they stand up against the emptiness that’s in your own heart. Then ask Him in. Confess your sins and tell Him that you need Him.

Think about this as we approach Good Friday. Think about the whip laced with bone that landed across the back of Jesus 39 times ripping His skin apart. Think about the punches to His face. Think about the 12 inch spikes hammered into His wrists, the spear pierced into His side. Isaiah 52 says that Jesus’ face was so disfigured, He hardly seemed human. This isn’t just a Bible story. It’s a verifiable historical event in which even atheists agree.

Examine it for yourself and ask yourself the most important question you’ll ever ask: if it’s true, why would God allow it and Jesus suffer it if there was another way to save our souls?